Local celebrity chef Shota Nakajima returned to TV for the current season of Bravo’s Top Chef. But more importantly, the past year has challenged him to become a pioneer of change for the restaurant industry.

For one of Seattle’s most notable chefs, Shota Nakajima, the past year was filled with extremely high highs and equally low lows.

The obvious low was the closure of his popular Japanese restaurant, Adana. Like so many others in the hospitality industry, it couldn’t weather the storm of uncertainty that COVID brought. “It broke me down completely. I was at a standstill.”

Nakajima was forced to let go of more than 30 employees, many who had worked with him for years. “They understood it wasn’t my fault, but to me execution is the only thing that matters. I felt I failed pretty bad. Mentally, I took it hard, not having a backup plan to support people’s livelihoods—that broke my heart in a way I could have never predicted,” he says.

After the closure, for three months straight he stopped talking to friends and family, logged off social media, drank too much and then left the city with his dog, Dodger, to ramble through the mountains alone. It was the only way he knew how to process the devastating loss.

During that time, he had an epiphany: “The restaurant industry is broken.” He thought a lot about how high employee turnover rates, stressful hours and revolving doors of talent were the norm, and he couldn’t find any peace with it. He realized that if he returned, he would have to do things differently.

Luckily, the highs were right around the corner. Nakajima got a call from Bravo asking him to appear on the Portland-based show Top Chef. He quit drinking and jumped at the chance to start filming the series in September 2020. Quickly, he became one of the most beloved contestants, winning over viewers, fellow chefs and judges with his laid-back demeanor and raw culinary talent.

“I think through Top Chef I got way better at cooking,” Nakajima says. “I’m able to put myself on the spot now and think quickly. I also just learned so much from everyone there. I took notes constantly.”

At the time of publication, the final episodes of the season have yet to air, and he couldn’t say how far he got in the competition. Now equipped with the lessons he learned from being on the show and the perspective he gained from time spent struggling with his perceived failure, he opened his latest venture, Taku, in May on Capitol Hill to a line that wrapped around the building.

The menu is built from his take on karaage, Japanese fried chicken, and he has plans to expand it in the near future, when the scene comes back to life. The design of the restaurant—with floor-to-ceiling comic book art and graffiti done by himself and other local artists—is just as interesting as the food. Everything about it was done with the simple intention to make people smile.

“I think I’m good at having fun, cooking good food and putting out energy that changes the conversation in a positive way,” he says.

Nakajima also wants to pioneer a new way to run a restaurant and brand. He is currently doing a host of pop-up and charitable formal events around the city as well as creating tons of content to help get people excited about the culinary world again. You can follow his YouTube channel, MakeUmami, for recipes, cooking tips and plenty of chuckles, or follow him on Instagram (@chefshota) for upcoming events and dinners. 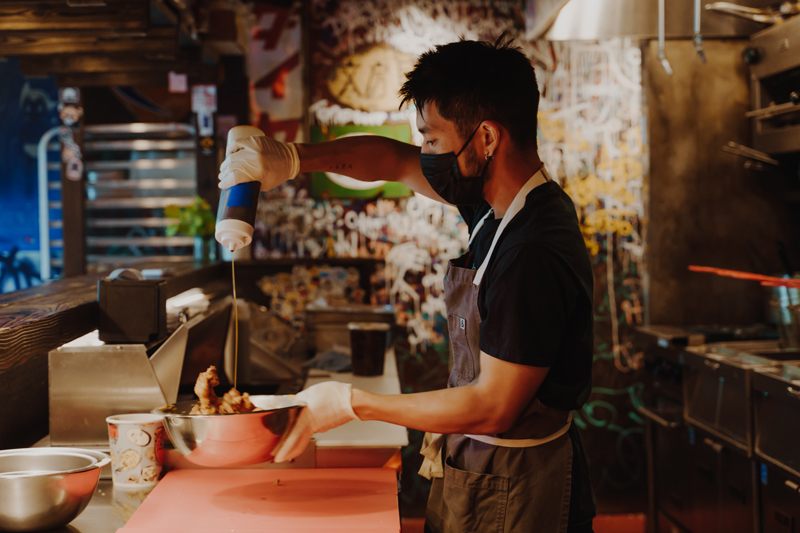 “Before all of this I just wanted to be the best chef—now I want to be the best leader,” Nakajima says. “My main goal is building a fair, responsible company that treats people right. We have a responsibility to take care of our employees, and to think about the whole industry differently.”

Go-to meal out: Dim sum, all day every day. I’m very impatient, and I want to try everything and pay the bill quickly.

Most overrated ingredient or technique: Food that takes too long. I just want my food or my drink, but again, that’s because I’m a bit impatient.

Most underrated technique: Being relentless.

Your definition of success: Building a good company culture, like Netflix, with a healthy mix of freedom and responsibility. I value creativity a lot, and I’m a firm believer in keeping good people on board.

Ultimate private-dinner party guests: My mom’s mom, because she passed away when I was young, and I wish I could have cooked for her and with her. And Oda Nobunaga; he was an old Japanese warlord. I love the way he did things and the things he changed in Japan. I’d love to cook for him and get yelled at by him.

Inspiration source: The woods and people—friends and chefs I know.