It’s a Jungle Out There

I was watching a video in Spanish, a language I barely knew, when I began to cry.

I was about to enter Tayrona National Park on Colombia’s Caribbean coast, where teal waters, dense jungle, and golden-sand beaches all converge to create a mindbogglingly beautiful scene.

For those reasons, it’s a popular place to go, and thus I was surrounded by people—yet I suddenly felt very alone. I’d just spent four memorable days trekking in the Sierra Nevada de Santa Marta mountains, where a hodgepodge crew of travelers quickly felt like friends I’d known forever. 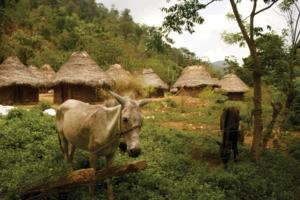 There was the sweet couple from Switzerland with their affable teenage daughter and her Colombian boyfriend, and the two friends from France with whom I got to dust off some rusty French-language skills acquired in school. There was the accomplished pastry chef from Spain and the Belgian who just happened to go to business school at my alma mater—both my age and with so many interesting travel stories.

We were en route to La Ciudad Perdida (which translates to “the Lost City”), an ancient, thriving metropolis that had dropped off the map for hundreds of years before being “rediscovered” in the 1970s. (It remained known all along to those indigenous to the area, who kept its existence quiet.) It’s believed to have been founded around 800 CE, or 650 years before Machu Picchu, making it one of the most significant pre-Columbian archaeological sites around. And it was no small village—as many as 400 families may have lived here, a big number by ancient standards. When Spanish colonization began in the 16th century, the settlement—known as Teyuna by locals—was abandoned.

The only way to get there is on foot with an authorized tour company, a journey about 60 people make each day. Teyuna certainly isn’t lost anymore. But it still feels special: adventurous, mysterious, and spiritual.

In our group, everyone was relatively fit, and we were able to cover the 30ish total miles at a brisk pace, leaving plenty of time for leisurely swims in the afternoons and conversations by candlelight in the evenings before going to sleep early in a hammock or bunk bed. I looked forward to our midday breaks, when we’d take a moment to pause and eat sweet slices of pineapple or giant, ruby-red hunks of watermelon, juice dribbling down our chins.

Belgian Marijn took me under his wing, translating everything our guide explained and making sure I always knew what was going on. Even as the only guest on the tour without full fluency in multiple languages—the majority of the group could toggle flawlessly from English to French to Spanish to Italian—they welcomed me into the fold anyway. 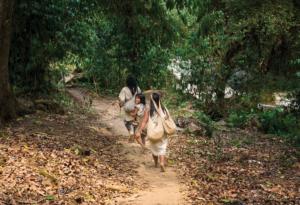 On day three, we woke up ready to visit Ciudad Perdida itself. I wondered if it would be more about the journey than the destination, or if whatever was waiting in the clouds would surpass what we’d seen so far.

The entrance to the city was grand and a little intimidating: 1,200 stone steps carved out of the mountainside, headed straight up. It was like a never-ending StairMaster but with better scenery and the promise of a big reward at the end.

And it was undoubtedly worth it. Teyuna was made up of round terraces, stone paths, a canal system, and open plazas; its architecture is unique among ancient ruins. We saw the boulder carved with a map that helped them get around and the huts where indigenous families today dwell. The highlight is a series of terraces, each smaller than the last, that ascend to the sky. From the higher ones, the view over the verdant landscape below is spectacular.

Marijn worked overtime translating for me. Midway through, he listened in on the information provided by another group’s official translator. “You’re getting a much better experience!” he boasted. I’m sure that I was.

We took our time exploring, but afterward, a long day of hiking awaited. On the reverse journey, we passed croaking frogs, a wild pig running across rocks underfoot, vibrantly colored butterflies and beetles, the biggest spider I’ve ever seen, and a pair of wide-eyed gray kittens I was tempted to scoop up and take home with me.

Without any cell or WiFi service, the hike was truly unplugged—something I desperately needed. The mountainsides were steep, the river crossings cold, and the accommodations rustic, but it all added to the experience. Even the small annoyances didn’t detract, like the fact that everything I owned was perpetually damp and I, despite frequent showers and river dunkings, was always covered in thin layers of sweat, sunscreen, mosquito repellent, and dirt.

As the hike ended and we all piled into a red off-road vehicle for a bumpy ride back to where we started, I began to wish the time would stretch. When they dropped me off along the way at Tayrona National Park, I felt like a baby bird trying to flap its wings. I’ve always loved solo travel, but the bonding experience of some tough trekking in the jungle was strong—and now I had no generous personal translators to usher me through.

I ended up enjoying Tayrona very much, particularly the screeching monkeys, beautiful beaches, and fresh-squeezed orange juice. I woke up early to go on a hike that was mostly a rock scramble to the indigenous village of Pueblito. I lost the trail along the way and started to despair, but I found my way back and made a new friend, this time from Chile.

A few days later in Cartagena, I bumped into Marijn on the street while looking for a place to eat dinner. I felt like I was running into an old friend I’d known for years. Eating pasta while wearing clean clothes was a world away from our time hiking to Ciudad Perdida. But in the thick of the Colombian jungle, time isn’t measured in hours or days but in flaps of a butterfly’s wing, jumps from a cliff into the cool water below, and connections made with fellow travelers.