Every Sunday afternoon I get a notification on my phone: “Your screen time was down 6 percent last week for an average of three hours and 12 minutes.”

I started relishing each week when my screen time went down, citing “conscious, healthy decision-making” as the reason for the good news. On the other hand, when my time went up, I’d blame slow workweeks and give excuses for the amount of time I spent scrolling through news feeds.

In reality, my screen time mostly reflects the hours spent scrolling Instagram in the morning and browsing Pinterest while in line at the grocery store. It wasn’t about conscious healthy habits or lack thereof; it was simply a twitchy finger and passive entertainment that resulted in my time spent in cyber-reality each day. 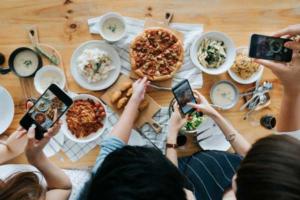 utdoors as reasons to put down the phone for a week.

When I talked to friends and coworkers about my current habits and potential detox, it seemed like a joke to even suggest it. I kept pushing it off but knew I wanted to try. I even waited until the very last minute to get started so I could make the deadline for this issue of Reflections but not miss out on too much.

In case you’re looking to do a similar detox, here are the rules I set for myself, all trackable through the iPhone Screen Time setting.

I started my detox on a Wednesday morning at 6:00 a.m. I chose this morning for one reason: Our deadline was soon approaching, and it was the first morning I didn’t wake up with a twitch to scroll through my Instagram feed.

It might seem silly to some, but I was trapped in a cycle of scrolling, liking and sharing, and the first step was literally the hardest. Mainly because I didn’t want to start something I might fail.

The first day was pretty easy once it was under control. I did a few things that made it easier: I moved all my social media apps into a folder in the back of my phone, I turned off all notifications and I set a screen-time limit so my phone would remind me before opening apps that I was on a timer.

The first days were only hard when friends wanted to share pictures, show me funny things or were referencing a person or place t

hey found via Instagram. Instead of living content-less, I turned to podcasts. I found four daily podcasts and a few weekly ones that fueled my mind with topics to bring up with friends and maintain conversations that didn’t lead to Facebook profile comparisons or an Instagram stocking frenzy.

The middle of the challenge was the hardest. Based on my timeline, Friday, Saturday and Sunday were in the middle of my detox, and without work being my focus for eight hours of the day I was left with twitchy fingers.

On Friday, I settled for a good old night in, playing board games with friends. Having people around definitely helped.

On Saturday, we were scheduled for a winery tour with friends around Woodinville. “This will be easy,” I remember thinking. “Just wine and friends and no need for phones.”

I was very wrong. My first almost-failure moment was in the morning, when I was making the all-too-important decision about what to wear. Usually I’d turn to Pinterest for some inspiration, but instead I defaulted to a safe and comfortable black-on-black outfit that I later regretted when friends shuffled in wearing cute hats and trendy boots. “I totally know the inspo picture she pulled for that outfit,” I remember thinking when one of my trendier friends walked in wearing pleather leggings, boots and a plaid jacket.

My second almost-failure was during a lull in conversation when everyone was scrolling Instagram and sharing pictures of the day. There I was, sitting alone, watching my friends scroll through their phones, and I almost reached for mine to see what they were sharing. “Wow, is this what we usually look like?” I wondered instead.

Finally, my failure of the afternoon came when it was time to split the check for the tour and I had to hop onto Facebook to make a payment. It’s okay, I’d planned for this kind of thing. 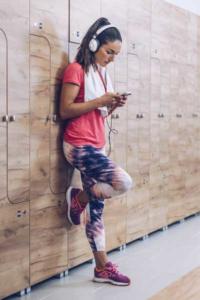 Being back at work on Monday was a relief. I could work all day, chat with coworkers and plan things to do at night to keep myself busy for the next couple of days to finish out the challenge strong—and I did.

By Wednesday, I neither craved social media nor did I even have to think about stopping myself before idling opening apps and scrolling. Sure, when I was sitting at a coffee shop waiting for a friend to show up, or standing in a long line, I’d be a little more consciously bored instead of passively entertained, but it was nothing I didn’t get used to.

You will not believe me when I tell you that I woke up Thursday morning and didn’t even think about going on Instagram. I decided later in the day to see if I missed out on anything but was quickly disappointed and a little judgmental about how much I’d relied on the app before.

In 30 seconds, I was off the app and back to reality. I was proud. I am proud. It seems like a small accomplishment looking back, but the benefits I found speak for themselves.

The biggest difference I found came in the mornings. The first thing I used to do after snoozing my alarm three times was open Instagram and see what the beautiful influencers were up to and what my “cooler” friends had done the night before. The early-morning scrolling trapped me in a cycle of comparison over the last few years, where my clothes would never be the best, my Friday-night plans were never the coolest, my house was never the prettiest and I couldn’t catch up.

Of course, insecurities still lie within and I still know girls that I see as perfectly beautiful who know the coolest cocktail spots. But, for now at least, I’m not tormenting myself with Instagram stories of friends out to dinner while I’m snuggled at home in my PJs, thinking I should be doing more. Now, blissfully oblivious to what everyone else is up to, I’m doing a little more of what I want and less of what I think I’m supposed to.

Nothing you’ll read online about social media detoxes will tell you this, but my detox had a huge effect on my workouts. Turning on my wireless headphones and leaving my phone in my bag was a game changer. I used to scroll through Instagram between sets, or look up “15-minute ab crushers” when I needed inspiration. If I’m being honest, I’d even keep a hidden folder in my Pinterest full of athletic-looking women that I’d scroll through to stop myself from giving up a particularly hard workout as reminders of what I was working for.

Turns out, I didn’t need any of that. Ditching the phone meant ditching distraction and having to enter the gym with a plan. It also meant less rest time that I didn’t actually need and more focus on getting the best workout. All in all, trying to kick my habit meant more gym time in general because it was an easy way to take up an hour or two of social-media-free time during the moments my fingers got twitchy for a feed.

In an effort to take up time while sitting idly, waiting for coffee orders or standing in lines, I turned to podcasts. So many podcasts. I started listening to The Daily, Next Up, Science Vs, The Besties, Dope Labs, Trends Like These and so many more.

One of my fears when relinquishing all social media was cutting myself off to what was happening in the world around me. Instead, I found that the world was much bigger beyond my feed. In one week, I got deeper into election news, the economic realities of mattresses, which video games came out this month, how fitness benefits our mood and so many more topics that couldn’t be digested in a 280-character Tweet or square image with caption. The biggest misconception about social media is that it’s connecting us to the world around us better than any other medium; that’s just not true.

It’s not all good news. The biggest bummer during this detox week was my annoyance at my loved ones. Yes, maybe I was a little bitter at first that I couldn’t join them online, but by the end of the week I was simply annoyed that happy hours spent with friends sometimes led to me watching them scroll on their phone during lulls in conversations instead of looking for more to talk about. I noticed most people turn to their phones while their brains recharged with more topics of interest.

Standing in lines, walking through crowds and attempting to make plans without the aid of social media added frustration as I looked around, hoping for a connection and looking for human interaction while everyone else was enjoying that connection through their screens.