Between the Lane Lines

Three-time Olympian and Club member Tom Malchow talks about gold medals, competing against Michael Phelps and life after the Games.

Reflections magazine: What initially drew you to swimming?

Tom Malchow: I grew up in Minnesota, and naturally everyone wants to freeze the water and skate on it, but skating wasn’t my calling. I played a little basketball and baseball, but I also had asthma. Swimming seemed to be a little more conducive to it. My mom was a competitive swimmer, not very seriously, but we were always around the water. My parents just wanted me to be safe and comfortable around the water, just as a life skill. I fell in love with it and got lucky with finding a coach and program that I enjoyed and was fun. When you get kids into a sport, you want to make sure it’s fun, something they enjoy. Don’t try to build an Olympian from day one. In the beginning, I had no intention of competitively swimming for 20-plus years. I had no intention of becoming an Olympian.

RM: When did that transition happen? When did you start thinking, I’m good at this?

TM: That’s a good question. I don’t think there was one time in my life where I said, “OK, I want to be an Olympian—that’s my goal.” I think it was the fact that I always enjoyed the sport. Coaches that I worked with, people I worked with were good about goal setting but also about longevity in the sport. They wanted me on a slower progression, or a more thought-out progression. They didn’t want me to get there overnight and be a “one and done.” I look back at that and think my club coach could have had a lot of fame and success if he had pushed me harder. My college coach got recognition for taking me to three Olympics, but it was my club coach who decided: “At 14 he’s not going to swim two-a-day practices and huge numbers [of meters].” He probably could’ve gotten me there at a young age, but I probably wouldn’t have lasted in the sport for three Olympic cycles.

RM: Burnout seems to be a common problem among swimmers. It’s smart to have a coach actively preventing it from the beginning.

TM: I don’t think burnout is uncommon at all, and I think part of it is swimming’s not really a social sport. I mean, you talk a little while hanging on the wall and before and after practice, but when you’re doing 10,000 meters, it’s you and the bottom of the pool, you and the black line, you and the pace clock. It’s easy to burn out. It’s so important to find the right coach who understands you and who thinks about short-term and long-term goals, not overnight success. And someone who tries to keep it fun. 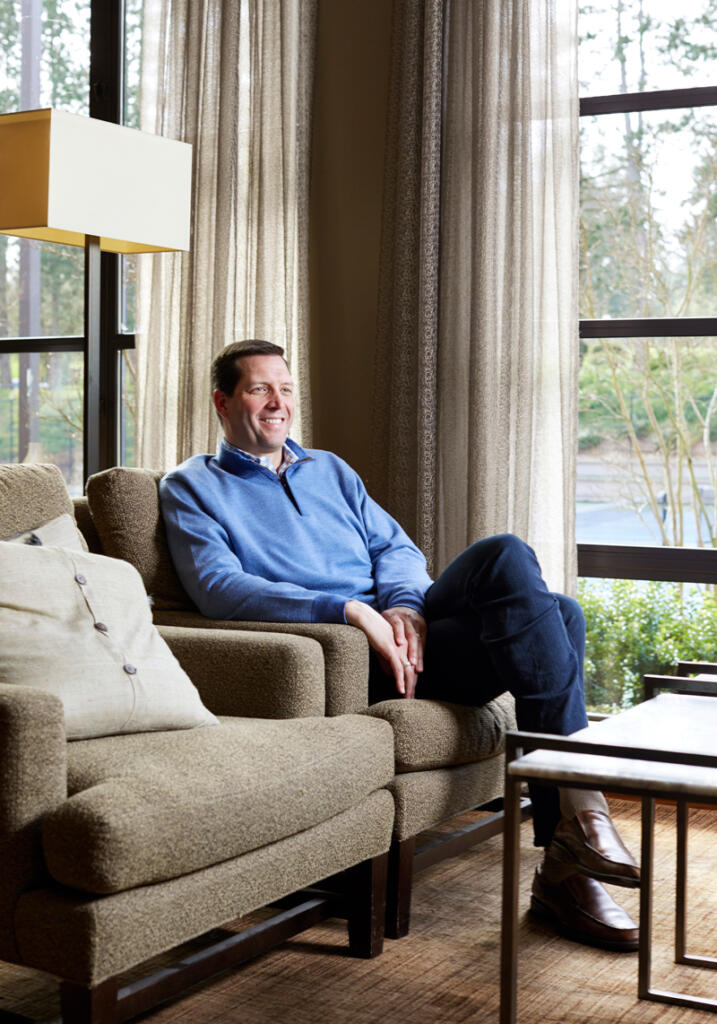 RM: By the time you went to college at University of Michigan, were you on the Olympic track?

TM: I think I was more on that track by then. I trained hard in high school, but I didn’t know what hard training was until I got to Michigan, which was probably good, again back to the natural progression. In college I was lifting more weights and swimming doubles four days a week.

RM: Do you remember the kind of mileage you were swimming?

TM: Michigan is known as a distance-oriented program. We were doing high yardage, around 18,000 to 20,000 meters a days. I was a 200 butterflier, but I ended up training with the distance group because 200 butterfly is a demanding event and my coach always believed in good aerobic training. Obviously it worked, but it was a painful way to get there.

TM: I think I chose it because it was a challenge, and I thought I’d do the things other people didn’t want to do. That’s butterfly and the 400 IM. Then I fell in love with the stroke, and it worked out well for my body type too.

RM: Although you eventually competed against another very famous butterflier.

TM: Phelps. Yeah, you’ve got to talk about him. It’s fun to say I swam against him. It’s fun to say that in Phelps’s first Olympics he was fifth and I was first. After that I think I beat him one more time in a major national competition. But he’s been good for the sport. You can look at a few issues he’s had along the way, but a lot of athletes on that level, with all the scrutiny and now social media, just can’t get away from it. He’s made a couple of bad mistakes and owned up to them, but he’s been great for the sport, bringing more attention and sponsors. It’s been fun to watch.

RM: What did making the U.S. Olympic team for the first time feel like?

TM: The first one was a lot to digest because it was between my freshman and sophomore years in college, and I was just this 19-year-old kid. A lot of new things were going on in my life, and then all of the sudden I’m an Olympian. Honestly, everybody was thinking I was going to be third or fourth at trials, but the two people that should have gone were clear-cut. It was fun.

RM: Were you proud that you shocked people a little and exceeded their expectations?

TM: Absolutely. There was a bit of an element out there that maybe I got lucky, maybe I had a good day, one good swim, and now we’ve wasted a slot on somebody that wasn’t ready for the next big step. To be able to go to the Olympics and back it up by getting on the podium with a silver medal was further justification that I was ready to compete on the world stage. It was my time to take over the reins as one of the most prominent butterfliers in the United States and the world. I think getting the silver—obviously everyone wants the gold; I didn’t go in thinking I wanted silver—set me up to stay focused for the next four years because I was close. I wanted that gold; I was so close. But I also still had three years of college to finish.

RM: What is your degree?

TM: I have a degree in management communications. So I went back to swim at the NCAA, and there was a lot going on. But I knew I had to get back on the Olympic team and be number one. It just so happens it worked out.

RM: What did it feel like to finally win the gold?

TM: It is the ultimate thing, the cherry on top. Everything I had worked for for 20 years. It’s a ton of excitement and also some relief.

TM: Yeah, relief to finally get there. It was four years going from silver to gold and 20-plus years to get to that point. The Olympics was the pinnacle, and there was definitely some relief. It only comes around every four years. There are no do-overs in swimming. There’s one chance.

RM: Aside from the race and gold medal, any other big Olympic moments stand out for you?

TM: Each Olympics had something unique. The silver medal was very cool and to be able to do it in Atlanta, at home. I went to the opening ceremonies, and when you’re the host country, you come in last and 75 percent of the people are there to see the host country. Sydney was pretty cool because they appreciate swimming, and to win a gold medal was great. And Athens, where the modern Olympics started and to be team captain, was a pretty cool experience. I didn’t do what I wanted to in the pool in Athens. I was swimming with a torn-up shoulder, which was frustrating. I had never been hurt in my career, and then to be hurt like that was tough. That happened right before the Olympic trials, and I wasn’t swimming well.

RM: Was it overuse?

TM: It’s hard to say. I don’t remember any one thing I did to hurt it, but I wasn’t swimming very well. The team doctor sent me to get an MRI, and it was a complete tear in my subscap, one of the four muscles that make up the rotator cuff. It was just completely torn, so at that point there was no time for surgery. It was “Take some anti-inflammatories and go see what you can do.”

RM: What was it like to swim on that shoulder?

TM: It wasn’t actually that painful, but it’s one of those times when you have to deal with the mental side, and some frustration. But to have peers that elect you as team captain even though they know you’re injured, it was still saying I’ve been around; your team still looks up to you even though you’re not 100 percent. It was a cool experience to lead that team. I can’t remember exactly how many medals, but we did well that year.

RM: How was the transition after your third Olympics?

TM: It wasn’t as hard as I thought. A lot of people have a hard time making that transition because swimming is exciting. You get to work out for a living, and now I’m lucky if I can find 20 minutes to get to the club and work out. I used to get paid to do it, travel the world, and have three massages a week, take care of my body. Some people say they know they want to coach after. That was never me, not my personality. I was curious about life outside of swimming, so I left the sport and went and got a job selling medical supplies. For the past 11 years, I’ve been selling hip and knee replacement stuff to orthopedic surgeons. It’s competitive, it’s unpredictable and it’s not a nine-to-five, which fills a little bit of that void. It’s not the satisfaction of winning a gold medal on the world stage, but it’s something I’ve enjoyed. And of course I got married and had kids and all those things are a lot of fun and a great part of life.

RM: You have two daughters, correct?

RM: Do they recognize your accomplishments at all yet?

TM: They’re young, but they’re starting to digest bits. They’ve seen videos and they’ve seen my medals. We live in Sammamish, and my daughter swam at the country club out there. The other day I went to pick her up, and Shannon was standing with four of her friends, and she’s telling them “My dad’s a gold medalist.” All of a sudden I’m surrounded by a bunch of little people and they are all asking me questions. It was cute. So I guess it sunk in there a little.

RM: What lessons have lasted from that period of your life?

TM: Definitely having a work ethic, and being able to put up with a lot of discomfort. I think no matter how busy work gets, it wasn’t as bad as doubles and going to the weight room knowing they want to make you throw up and then get in the pool. It’s not good when your coaches get satisfaction from seeing you throw up. Also, having a commitment to team and time management.

RM: Any advice for younger swimmers, perhaps those about to go to college?

TM: Going to a collegiate level was a big change, a good change. I think it’s about trying to find the program that fits the type of training you’re used to. Pick a program that has a good academic interest too; look at the academic and athletic side.