Olympic swimmer Chris Chalmers talks about the lessons he learned from competing in the games and how he incorporated them into other areas of his life.

What was your greatest accomplishment in sports?

What was the most challenging thing about being an olympic athlete?

The training itself. I did two hours in the morning and three hours at night every day. It was a huge workload because I was also going to school. All my friends would go out, and I’d stay and train.

What was the greatest reward of being an olympic athlete?

There are a lot of moments, but one of the proudest moments was when I was elected captain at USC. It was for my senior year in 1990. Making the [Canadian] Olympic team was also incredibly rewarding because between the years ’84 and ’88 that was the whole focus. It was on making the team, and when I did, it was a huge, huge relief.

What did Olympic-level sports teach you about your body?

I think the biggest thing is that you can never underestimate what your body can do. Keep pushing yourself, and you’ll push through barriers. We would have practices and you thought you couldn’t do another stroke, but your body gets used it. And you do it. 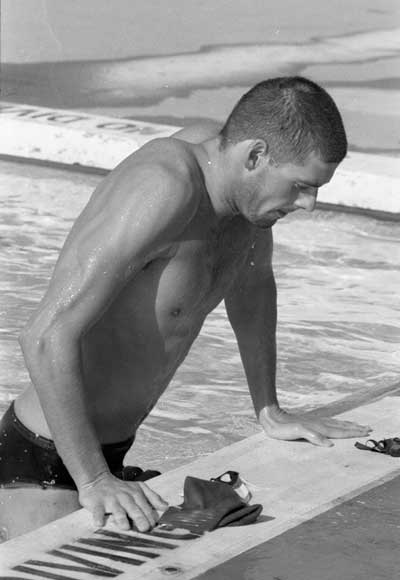 What about mental strength?
I think the biggest thing is to focus on yourself. You can only control what you can control. I remember me and my coaches, we’d hear reports of other swimmers doing really incredible sets or times, and it can kind of play with your mind. You think, Am I going to be in good enough shape? In the end, you can only do what you can do and be confident in your game plan.

And how did that relate to your subsequent business career?
The biggest thing is goal setting. With sports, you look at these three-month or six-month blocks where you really train hard. It’s where you lay the groundwork. In business, it’s the same thing. You want to achieve very big things, but these projects aren’t day projects, they are monthlong or yearlong projects. The focus I get to approach those goals comes from going through sports.

How did you know it was time to retire?
It was different back then. Now swimmers can continue on and runners can continue on past their early 30s. Back then, there was no money in swimming, and so your parents had to fund you or you had to get a real job. That’s when I decided to go to graduate school. It was tough my senior year, after going through the Olympics and three years of college swimming, my fourth year I had to focus on studies. I would have loved to continue on; I loved the sport and the people, but there was just no money in it

Was it tough letting go?
Yes, because your whole identity gets wrapped up in swimming. When people meet you, they get to know you as Chris the swimmer. When you get finished swimming, you have to reinvent yourself; you have to come up with a new identity. That was the toughest thing.

Do you miss the rigorous training, or do you find relief in knowing you can be a little easier on your body?
I think the biggest thing is sports are very black-and-white. You train very hard and you see the rewards when you do your swim meet; you see good times happen. Sometimes life is not like that. Sometimes you work really hard and the project still fails. It’s not as black-and-white, so I miss sports in that regard. There’s a winner and loser, and when you train really hard, you do well, and when you don’t train hard, you don’t do well. It’s different in the real world.

What do you know now about training or your body that you wish you knew when you were a budding athlete?
Oh yeah, there is a lot. When you’re young and going through that process you have lots of questions about what the best training is and what you need to do to get there. I’m actually working on a side project now called Swim Labs, and it’s video stroke analysis for swimmers. That’s one thing I wish I had back then: stroke analysis. Doing the wrong technique is not helpful. It is fun and great to start an endeavor that is a business of passion.

What advice do you have for young athletes?
I say this to my kids all the time: if they don’t like it, don’t do it. Don’t do it for me or for my wife; do it for yourself. I think the biggest thing is if you really like it, then you’ll work hard. I’ve found there are two types of talent: natural ability and the talent to focus and work hard. And the second is the more rare of the talents.

Are you engaged in philanthropic or community-based work?
I’m always asked to do things, speak usually, for swimming, and I do as much as I can. I at least always participate in Swim Across America for cancer.

This content was originally published in a Reflections issue from June of 2015 in an article titled “Life after the Pros.”