Five Lesser-Known Adaptogens that Promote a Sense of Calm

These functional herbs and roots have been used for centuries to ease stress and calm the body and mind. Try them and see how potent a simple cup of tea or tonic can be.

This herb (also known as tulsi) is often called “the queen of all herbs” or “the incomparable one” due to its powerful, revered effects on the body. From stress relief and cognitive enhancement to quelling inflammation and reducing free radicals in the body, it’s been used primarily as a tea in Ayurvedic medicine. It contains anti-microbial and anti-fungal properties, but also maintains a pleasant taste and smell that promotes serenity. It comes from the same family as the more common culinary basil plant, but has a unique flavor profile all its own. 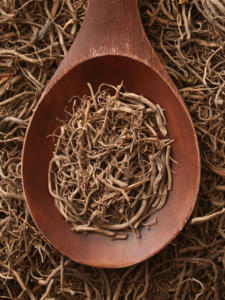 This herb specializes in reducing stress by lowering cortisol and blood sugar in the body and works directly on the nervous system. It is often ground into a fine powder and consumed as a tonic or mixed in with milk (or nut milk). The taste and smell can be quite bitter but the effects are potent. “Ashwa” means horse in Sanskrit, and it was named that because it’s said to give you the calm, steady power of the animal.

Valerian is a beautiful flowering plant but the hearty root is where the adaptogenic properties are found. The primary use of the root is as a sleep-aid or mild sedative. Prepared most often as a tea, it’s best taken at night when you have the opportunity for a long period of rest.

This herb belongs to the parsley family and thrives in the wet, humid regions of the Middle East. It is relatively tasteless and odorless and is often made into a simple tea. Traditionally, the herb was used topically for wound healing as it’s been proven to accelerate cellular and collagen production. However, it also promotes nerve growth within the nervous system when ingested orally and is believed to relieve stress and improve memory and cognition.

Rhodiola is another root that has direct effects on the nervous system. It has been used to help ease depression, anxiety, fatigue and stress. Also called “golden root,” it is often cited as a recovery tool for use after long periods of physical or mental exertion. This adaptogen is commonly sold in supplement form, but also comes in a mild powder that can be steeped as a tea or used in smoothies.