I knew Japan would be unlike any country I’d ever visited before—but even with that understanding, it still surprised, thrilled and sometimes frustrated me in ways I could have never imagined. Overall, it was an incredibly memorable trip because the country has such a strong sense of identity and provided an opportunity to try things—like these four—that I’d never experienced before.

My Japanese tea ceremony began across the street from the tearoom, in a kimono shop filled with beautiful garments. After a few moments of contemplation, I chose a kimono that was royal purple with brightly colored flowers. A woman dressed me, first in a hadajuban, a white cotton slip; then in a nagajuban, a heavier layer that just peeked out from under my collar; and around that, an under sash called a datejime. Then it was finally time for the kimono, and around my waist, a decorative silk sash known as an obi. Socks (tabi) meant to be worn with formal sandals (zori), a purse, and an updo completed the look. I thought I might feel constrained in all those layers, but instead I felt supported.

I walked (quite slowly!) to my workshop, where an instructor took me step-by-step through the process of making green tea the way it’s been done for four centuries.

I studied intently. The Japanese bring a reverence to the things they do, and I wanted to follow suit. Somehow, I found my hands moving in a fluid motion, expertly tucking the fukusa (a silk cloth used to purify the equipment involved) this way and that to create the desired effect. Every detail is important and has meaning, from the way the tea cup is oriented to how you drink the tea. I whisked the matcha using only my wrist, moving it as quickly as I could. Soon, bubbles and froth appeared, indicating it was ready. “You’re not like the others,” my instructor said. “Your movements are very elegant.”

I promise I’m not that way in regular life—I think the kimono deserves the credit. 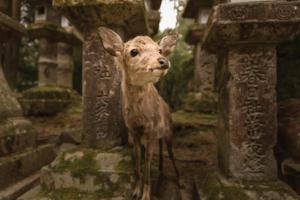 Bowed to a deer

Nara was once Japan’s capital, and it has a long and distinguished history. As a result, it features beautiful, noteworthy temples, including Todaiji Temple, which houses a Buddha statue that’s nearly 50 feet tall in one of the biggest wooden buildings in the world. It also has a lovely garden, Yoshikien (free for foreign tourists), and many other attractions, but it’s perhaps most memorable for the roaming deer.

These aren’t just any deer, though. They’re so polite, they bow to you when asking for food.

My favorite was a fawn that approached me, trying to bow but awkwardly bobbing her head around in a circular motion instead. For the effort, she got a deer cracker and an enthusiastic word of encouragement.

Slept in a capsule hotel

“Stay in a capsule for a couple of nights,” a friend recommended. “It’s a trip. You might hate it, but it’s a good experience.”

I took his advice, and fortunately I didn’t hate it at all. Invented in Japan, capsule hotels offer individual yet micro-sized rooms for guests. Mine was just the width of a double bed, but it was plenty adequate. A roll-out cabinet under the bed easily fit my backpack, and a shelf above the bed held things I wanted close at hand. There was an accessible outlet, great for charging gadgets during the night. An iPod gave me the power to raise and lower the bed, set an alarm, turn on the fan, and adjust the lights. The only glitch here was on the first morning when the alarm went off. I was expecting some kind of sound, but it worked by slowly turning up the lights and raising the bed into a couch position. In sleepiness, my initial reaction was to think I was surely under attack by someone who had gotten control of my iPod—but, no, this was something I had set in motion (and way more effective than a traditional alarm in waking me up). 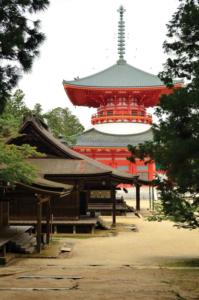 The capsule hotel I chose, the Millennials in Kyoto, included a nice common room, a kitchen and even a co-working space, with free beer during an evening social hour. All the phone calls and eating occurred in the common area, which kept the sleeping portion clean and quiet. When it was time to check out, I was sad to go—it may have been the smallest place I’ve ever stayed in, but it was big on value and convenience.

After spending time in the densely populated, urban cities of Tokyo, Kyoto and Osaka, I was ready for a little escape. Koyasan was just that.

This mountain town is known as the epicenter of Shingon Buddhism, and more than 50 Buddhist temples here offer accommodations for guests (called shukubo). I stayed in one of them, Kumagaiji, in a simple room with tatami mats and a futon on the floor. I loved the yukata (a cotton robe that’s a more casual version of the kimono) that was provided to wear around the temple, including to meals if you wish.

Meals served are the traditional cuisine of monks, known as shojin ryori. Everything is vegetarian and comes in a well-rounded variety of tastes, textures and colors. I recognized almost none of it, but came away with a real appreciation for this style of cuisine.

In a neighboring temple, I participated in an Ajikan meditation session led by a monk, and at night I took a fascinating tour of Okunoin Cemetery before returning to my temple by curfew. In the early morning, I observed the temple’s prayer session and fire ceremony, an important and moving ritual. This small glimpse into the life of a monk, so different from my own, was an undoubtedly worthwhile way to spend 24 hours.