Let’s get real: It’s time to go outside. More so, it’s time to take a real, honest look at the time we spend indoors and what that’s doing to us and future generations. That’s right, we’re talking about the latest epidemic to hit the United States, nature-deficit disorder.

In 2008 Richard Louv coined the phrase nature-deficit disorder in his book Last Child in the Woods, which investigated the relationship between children and the natural world.

To grasp the human costs of alienation from nature, it’s important to understand two things: First, the term biophilia, which explains our innate tendency to connect with nature and other forms of life. Biophilia is often cited as the reason we perform better in workplaces with plants and water installations or dog-friendly offices.

Second, according to a study conducted by the Environmental Protection Agency (EPA), the average American spends 93 percent of their life indoors. Roughly 87 percent of that time is inside and the other 6 percent is spent in cars, buses, trains, et cetera. 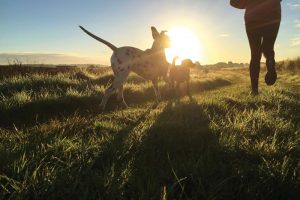 Nature-deficit disorder quickly became a real diagnosis for not only children suffering from the side effects but also adults. He argues that even though humans have been urbanizing and moving indoors since the introduction of agriculture, the most recent social and technological changes in the United States in the past three decades have accelerated the change to an unmanageable level.

His research inspired groups across the country to create nature and wellness centers completely focused on engaging humans in nature and the benefits associated with that.

Wilderness Awareness School, a Washington not-for-profit organization, was created in 1983 with a mission to help people cultivate healthy relationships with nature based out of the understanding that most people have a deficit in their day-to-day lives.

“One of the greatest challenges for adults is simply slowing down. The over-culture in America rewards us for being busy and guarded; at the same time, it conveys that we haven’t accomplished enough yet because there is no ceiling to how successful or attractive we can be,” says Elizabeth Penhollow, the organization’s Youth Program Assistant Director. “There is a growing body of research that examines the countless ways in which nature contributes to integrative health and well-being.”

“Learning about the research is helpful, but really all you need to do to start receiving the health benefits is go outside,” Penhollow says. “If you’re in need of a nudge to strengthen your connection to nature, perhaps identify a few nurturing activities you already do and take them outside. Take a walk during the evening golden hour and find a place to rest for a few minutes. Gradually increase that time of rest.”

Today, science is playing catchup to urbanization. Studies from Japan found that walking in greenery brings the average person’s cortisol (stress hormone) levels down 12 percent with a 7 percent decrease in sympathetic (fight or flight) nerve activity.

Research from the National Academy of Sciences found that 90 minutes in nature reduces “rumination and subgenual prefrontal cortex activation,” meaning negative thought patterns are calmed and therefore an individual is at lower risk of depression.

You’re convinced, right? Sounds simple and easy during midsummer, but what about the winter months, when stepping outside runs the risk of a cold?

The benefits of going outdoors can’t be beat, and a recent study by the EPA blows all the preconceived notions of winter wellness out of the water. This study found that the concentration of pollutants is two to five times higher in areas with greater population than in nature.

People often think that getting a cold or flu in the winter comes from being cold outside, but the opposite is true, colds and flus are more predominant in the winter months because we’re spending more time inside with higher concentrations of airborne pollutants.

Being outside during winter months can have greater benefits on your emotional health than in summer months because there’s a proven correlation to a reduced risk of seasonal affective disorder (SAD) when people go outdoors, even in the cold.