What Science Says About the Best Time to Work Out

Is there a day or night difference between exercise times?

In a world that can be sharply divided between early birds and night owls, the best time to work out is hotly debated. Morning gym-goers say it’s great to prioritize working out before the day begins, while evening exercisers cite more energy (thanks to that extra sleep-in time) as the advantage to later sweat sessions. But what does the research say?

For short-duration exercises, late afternoon to early evening—between 4 and 8 p.m.—is usually the winner from a power perspective. At this time, your grip strength, vertical jump and even reaction time are at their best. On the other hand, you’re likely to have the least amount of power between 6 and 10 a.m. Why? It may have to do with your body’s core temperature or shifts in stiffness and flexibility that happen over the course of the day—researchers are still studying all the factors at play.

In the morning, when your body’s temperature is at its lowest, heat exposure can increase power, but adding heat doesn’t seem to help any other time of day. Conversely, in a hot environment, some evidence suggests that exercise capacity goes down in the afternoon, when your body temperature is already at its highest. So afternoons as an ideal time for exercise may depend on your local climate.

For endurance athletes, the longer a workout goes, the less time of day seems to matter—although one study did find that elite cyclists tend to pedal faster at 6 p.m. than 6 a.m.

What if you’re trying to build muscle? Testosterone, a hormone in the body that helps you get stronger, peaks in the morning, but research shows you get a better boost of testosterone when exercising in the evenings.

Whether you’re pumping iron or pounding out miles on pavement, consistency matters. Whatever time you choose to work out, you’ll probably get better at that time. Studies show that aerobic capacity improves the most at the same time of day that you usually perform your high-intensity training (with a slight edge to the afternoon, which gets the greatest bump in performance over time).

Resistance training shows similar results, but with a twist—those who work out in the mornings improve at any time of day, while those who work out in the evenings improve mostly in the evenings only. The study authors conclude that if you’re preparing for a competition, it’s best to work out at the same time of day the competition will be held. If that’s unknown, mornings are a safer bet.

How sleep and nutrition are affected 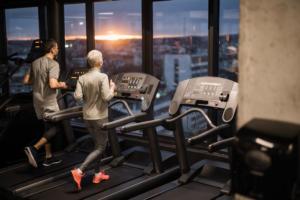 What if you’re less worried about performance and more concerned about overall health? Luckily, sleep quality increases with exercise whenever it’s done. Those who are physically fit sleep longer and better than others, spending more time in the restorative stages of sleep. However, one study found that moderate-intensity aerobic exercise at 7 a.m. led to more time in deep sleep and fewer awakenings than exercising at 1 or 7 p.m. However, a poll from the National Sleep Foundation didn’t find any truth to the idea that exercising too close to bedtime makes it harder to catch z’s.

When it comes to workout timing and nutrition, if you’re intermittent fasting and want to get in a workout on an empty stomach, morning is the easiest time to make that happen. There’s also evidence showing that exercising early leads to eating less for the rest of the day compared with exercising later.

Working with your schedule

If all those findings make your head spin, don’t go rearranging your schedule quite yet. Hard science aside, human behavior is an important consideration, too. Even if you’re able to determine that 4:36 p.m. is the optimal time to see results, that won’t matter if personal circumstances make it difficult to exercise then. That’s part of why athletes tend to self-select into sports that suit their chronotype—that is, their preferred circadian rhythm schedule. Early birds gravitate toward golf and triathlons, while night owls prefer water polo and volleyball.