Michael Smythies has a goal: Climb all five Washington volcanoes in under five weeks, beginning May 22. Follow his story as he raises awareness about one of the most pressing issues facing youth.

Within the span of a year, Bellevue local Michael Smythies went from a hobbyist hiker to a purpose-driven mountaineer with an ambitious summer 2021 agenda to summit all five of Washington’s volcanoes within five weeks. His motivating factor is mental health—both his own and that of younger generations. 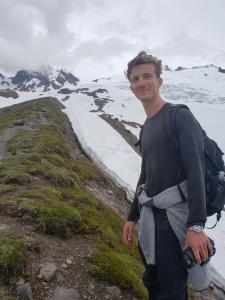 His journey started in 2018, when he received a degree in neuroscience from The University of British Columbia.

“Right after, I started working for a non-profit in Vancouver called the Kettle Friendship Society, and we did mostly community-based work,” Smythies says. “I got a lot of exposure to mental illness; it was a deep dive into what leads to mental illness, why it’s so pervasive and why it’s on the rise.

“Also, there’s been mental illness in my family. I’ve seen what it can do. I’ve seen it in my own life.”

He says over a year ago, just before the pandemic, he was “caught in a rut, in the deep end.” Always being fond of nature, he turned to the outdoors for a fix. “The mountains really helped. I had a couple of really transformative experiences.”

With these experiences in mind, he knew he wanted to help others and give them tools to get through tough times. It couldn’t have happened at a more apt time either.

“During the onset of the pandemic, I worked in the ER in hospitals in Tacoma and Puyallup areas. There, I got an immense exposure to medicine and treating mental health issues. It took an emergency to show me how ill equipped we are to handle these issues,” he says.

“It really, really hit me hard, the fact that people who struggle aren’t given the necessary knowledge and tools to handle their situation or get help. I felt an obligation to do my part.”

It was sometime in 2020 that he decided to combine his two passions. He would leverage his experiences in nature to help others.

“I understood that being in nature—being in the moment, working hard, doing something productive, enjoying scenery—there are so many benefits for the physical aspect of living life, but more importantly, the mental aspect,” Smythies says.

This May and June, he will attempt to summit Mount Baker, Adams, St. Helens, Glacier Peak and Rainier to raise money for Seattle-based mental health non-profit organizations, including National Alliance on Mental Illness (NAMI), Seattle. Currently, he is sponsored by Quality Auto Center and is hoping for more support along the way.

“I’d also like to spread the message that anything is possible. A year ago, I’d never climbed a mountain. It certainly never occurred to me to consider all five volcanoes in Washington state. But it’s a lesson in just putting one foot in front of the other, taking action, believing you’re able to do something you thought you might not be able to.”