Last summer Connie Min and Linda Chung won the USTA One Doubles 3.0 Sectionals in undefeated fashion, with a 16–0 record for the season. The women have only been playing tennis for a few years, and this was their first time at sectionals, making it an especially impressive win. But it didn’t come without some large bumps in the road.

“At sectionals, one of those huge metal floor sweepers fell off and hit me on the shoulder as I was walking out on the court for a match. I was in tears because I couldn’t feel my arm,” Chung says. “A man was playing and hit the curtain from the other side, and the broom fell. It was a freak accident sort of thing.” 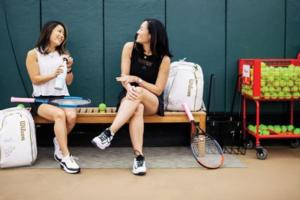 Min stayed calm and encouraged Chung to listen to her body, to not push it. It wasn’t worth getting more injured, she said. But it was the match that could put them in the finals, and Chung eventually decided to play. They won and moved on to the next round.

“The very next day at finals, I tore my calf muscle in the middle of the match,” Min says.

“We’re up 5–2 in the second set of the finals, and this is what we had worked for. And then she goes up for a volley and came down wrong. You could tell this wasn’t something you walk off. She couldn’t put any weight on it,” Chung says.

During a three-minute time-out, they formulated a game plan. Min would stand in the middle of the court using her long reach to get whatever she could from standing on one leg. Chung would cover the back of the court, running from corner to corner.

“I told myself, ‘We’re playing. We didn’t work this hard all summer to quit now,’” Min says. “Not today.” Amazingly, they finished the set and won the next. Min’s husband had to carry her off the court, but they were proud to be section champs.

“That’s just the type of person she is,” Chung says.

In the end, the women say the most important thing was the ability to lean on each other during the most stressful moments. Through the season, they learned a lot about what makes a good teammate and shared some of their thoughts.

How did you meet?
We met through the school; our kids are the same age. But we were just acquaintances until we signed up for a class together. I thought, I bet we’d be good on the court together.

What are the keys to being a good teammate?
We’re really compatible personality-wise; our thought process is almost identical. We love tennis a lot, but we don’t take ourselves too seriously—that’s a big part of it. If there’s a mishit or a ball goes into the net, there are no rolled eyes or judgment. We just laugh and move on. We have the most fun on the court, and that makes us play more relaxed.

What’s your warm-up for a match?
It takes us about an hour to warm up. We’re not veteran players, so we can’t just jump on a court. We start with a ball machine, stretch, ideally have a Spa Smoothie from Luna, then go play.

Have any advice for those thinking about trying doubles?
Find a good friend and have a good time. Team up with someone you’re comfortable with on and off the court. We actually started playing tennis, and then became friends. When we traveled and stayed overnight together, we realized we shared a similar background while growing up, similar families and struggles. That’s helped us on the court because naturally we are more comfortable.

Do you cross-train?
Nothing but tennis, during the summer season sometimes five times a week.

Best tips or tricks you have received?
“My favorite is to keep your feet steady. If you get too jumpy, you’ll hit it out.” —Connie Min
“I’m learning all about court awareness because I used to play a lot of singles where, at this level, I could get by making sure I got the ball back on the court. In doubles, I kept hitting directly at the net person. So I learned it doesn’t have to be fancy or special; just put it where they are not.” —Linda Chung