Safety Guide to Biking in Bellevue

Interested in commuting by bicycle? Here are our tips and tricks.

Commuting around the Eastside by bicycle has myriad benefits—increased physical fitness, decreased environmental impact and significant cost savings. But it can be intimidating to give up the security and comfort of a car.

Franz Loewenherz, the principal transportation planner for the City of Bellevue, said the city is consistently working to expand and improve the conditions for Bellevue bicyclists who want to enjoy the perks of pedaling around.

“We create about 12 miles of new bike facilities annually since voters approved the Neighborhood Safety Connectivity and Congestion Levy in 2016,” he says.

And because of the continued infrastructure growth and rise in riders, one of his main objectives is to maximize the enjoyment and protection of bicyclists, who are more susceptible to injury than drivers.

According to the city’s most recent collision trends analysis memo, “Vulnerable road users, such as people walking, bicycling, and riding motorcycles, are disproportionally killed or seriously injured on Bellevue’s streets. From 2006 to 2017, 43 percent of fatalities and serious injuries involved people walking or bicycling. In contrast, walking, bicycling and public transit make up only 18 percent of commute trips in Bellevue, according to 2016 ACS 5-year data.”

These statistics are pretty much on par with national trends, but that doesn’t mean officials aren’t taking steps to make some headway for locals who enjoy commuting on two wheels. The city currently has an effort underway called the Vision Zero Initiative. The goal of the program is to zero out the number of fatalities and serious injuries by 2030.

While the initiative includes vehicular collisions as well, the safety of bicyclists and pedestrians remains a large priority. A few years in, the project already produced some compelling information about where the highest occurrences of bicycle-related injuries take place. “That’s called a high-injury network, and with that insight we go in and make corrective improvements,” Loewenherz says.

So far, the initiative found that “the majority of fatalities and serious injuries for people walking and bicycling in Bellevue occur at intersections (as opposed to mid-block locations), with intersections experiencing 60 percent of pedestrian collisions and 55 percent of bicycle collisions.” (See the sidebar at right for a list of the most dangerous intersections in Bellevue.)

Based on that information, Loewenherz says the most important piece of safety advice is for people riding bicycles to be vigilante and scan the road ahead as they approach intersections. The second most common way bicyclists are injured is from cars pulling out of driveways and parking spaces. By increasing awareness of the dangers, he hopes to cut down on incidents.

To help with the education process, the city produces numerous educational outlets for anyone interested in finding a safe way to ride. One of the most helpful is the Bellevue Bike Map found at chooseyourwaybellevue.org/bike. It includes up-to-date routes and safety tips. 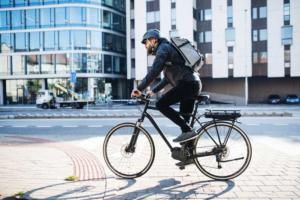 MyBellevue Mobile App, bellevuewa.gov/mybellevue.htm
Allows users to report issues, request services and stay connected to the city using their smartphone or other mobile device. Cyclists can use this app to report bicycle-related maintenance needs. A web-based version is at assist.bellevuewa.gov.

Bikewise, bikewise.org
A site with information about and reporting on bike crashes, hazards and thefts. You can help by reporting issues you see.

MapMyRide, mapmyride.com
Map your bike routes, track your bicycle activity and connect with friends. The Bike Bellevue group hopes that cyclists in Bellevue will identify their preferred bicycle routes so that others interested in cycling in the city will benefit from your knowledge.

While not a comprehensive list, below are a few reminders about laws pertaining to bicyclists.

The Cascade Bicycle Club, the nation’s largest statewide bicycle nonprofit, offers a number of practical classes on how to navigate urban cycling. Classes begin in April and topics include fixing a flat tire, maintenance for every rider, urban cycling techniques and much more. They have programs for adults and children, with one of the most popular being a school-based learning program for kids who want to bike to class. For more information, visit cascade.org/learn.

The options for urban cycling gear are virtually endless. Here in Bellevue, rain gear often tops the list of importance. But, according to REI.com, the following is the bare minimum—don’t ever leave your house without the following:

• Loud Bicycle, loudbicycle.com
Made to mimic a car horn, this product’s bellow can be heard above busy traffic noise and car stereos. Just check out the testimonials on their website to see why so many bike commuters praise it for saving their lives.

• Zackees Turn Signal Gloves, zackees.com
Night biking is the most dangerous, and Zackees invented a clever way to help. With the touch of your thumb, you can activate a red arrow on the glove and have the confidence that you are communicating your next move with drivers around you.

• Lucnt Taillight, lucnt.com
Per Bellevue law, bicyclists must attach a red light to the back of their bikes. Lucnt created a hard-to-beat, ultra-light and ultra-bright option crafted specifically to handle harsh weather, such as rain or snow. It is also equipped with a sensor that automatically changes modes depending on whether you are in motion or stopped.

How to Find Your Route

Head to chooseyourwaybellevue.org/bike and download the Bellevue Bike Map.

*Information provided by the City of Bellevue.