Psicobloc: The Most Adventurous Sport You’ve Never Heard Of

Psicobloc (pronounced see-koh-bloc) is a subcategory of rock climbing in which athletes scale tall cliffs, outcroppings and other large wall-like structures over deep bodies of water without the assistance of ropes or harnesses.

Once climbers reach the top or lose their grip, you guessed it, they drop into the water and swim to safety. The sport originated in Majorca, Spain, with the first official competition taking place in 2010, and the term in Spanish means “crazy boulder.” Also called “deepwater soloing,” the sport is currently enjoying a surge with international competitions cropping up everywhere, attracting the best climbers in the world.

Psicobloc competitions fall into two categories. The first is held in natural landscapes, where athletes compete to see who can get to the highest point before taking a plunge. The second, and more common kind, is held in outdoor recreational parks with manufactured walls and set routes that rise up to 60 feet above deep Olympic pools. These competitions pit two athletes against each other as they race up identical routes to see who can get the farthest quickest.

Large adventure companies, such as North Face, Red Bull, Clif Bar and Prana, are now throwing their support behind the burgeoning sport, and the largest competition is the Psicobloc Open Series. Due to the speed component and the daredevil-like falls (complete with audible gasps from the audience), the climbing community hopes these competitions will make it a more popular spectator sport. 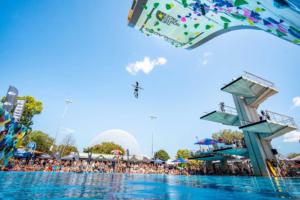 In August 2019, Bellevue Club member Coco Mar took first place in the junior category at the Psicobloc Open Series at the Parc Jean-Drapeau Aquatic Complex in Montreal. She competes in all types of climbing throughout the year but shared her thoughts about why it is quickly becoming her favorite.

Reflections magazine: How did you find out about psicobloc?Coco Mar: One of my teammates [from Seattle Bouldering Project] competed in Utah a few years ago. I wasn’t old enough to compete when I first saw it, but I thought it was really cool to combine the water aspect.

RM: What do you like most about the sport?
CM: The whole racing part—getting to the top first. The crowd and the energy are really cool too. It’s different from the more serious sanctioned USA climbing competitions; it’s more like a festival or party.

RM: How did you see the water affect the athletesí performance?
CM: The wall is 55 to 60 feet above the pool, and some people can’t get over the fact that they might fall. The route has a lot of dynamic moves, where your feet and hands come completely off the wall. A few people were scared of doing that, and they climbed down to get off. There were definitely some that fell unexpectedly.

RM: Were you nervous about falling?
CM: The first day I was there I practiced and climbed halfway up, then jumped off. Then I climbed all the way and jumped off. So I was comfortable, and I didn’t think about it too much.

RM: Is there a technique to falling or jumping?
CM: You try to fall like a pencil, go straight into the water. I did see some people who got some bruises from falling and hitting the water.

RM: What is the most challenging part of competing for you?
CM: The whole mental aspect of it. I do get really nervous before competitions, so I’m trying to focus more on improving that. I have been working on taking three deep breaths before I go.

RM: Do you train a specific way for psicobloc?
CM: Psicobloc is a combination of the three main climbing categories—speed climbing, the tall wall mimics sport [climbing], and bouldering because you’re not connected to ropes. I already train those techniques during the different seasons, so it’s just putting them together, plus a few days of strength training.

RM: Where are your dream spots to climb?
CM: I want to climb outside and train in other countries because the style is different everywhere you go. I really want to go cave climbing in Spain. Also, I’d like to go bouldering in the gyms in Japan. They look super fun and have some very strong climbers.

RM: What are you currently excited about in the climbing world?
CM: I’m excited to watch the 2020 Olympics because climbing is going to be in it for the first time.

RM: What does that mean to you for the sport to be recognized on that level?
CM: I think it’s really cool, a lot of people say it’s not a sport. When you mention it being in the Olympics it makes them stop. It’s cool that it’s getting more recognition because people don’t have that much knowledge about it. 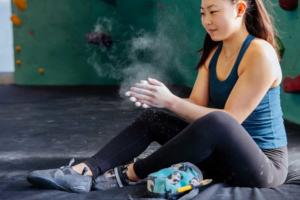 Where to Psicobloc in Washington

As of right now, there are no local recreational facilities set up to hold psicobloc competitions or training. But climbing.com recommends two incredible outdoor spots in the Pacific Northwest.

Banks Lake, Grand Coulee, Washington
“Washington State doesn’t exactly conjure Euro-style images of deepwater soloing. But water pumped from the Columbia River into the Grand Coulee basin created Banks Lake (about four hours from Seattle or two from Spokane), where you’ll find granite and basalt outcroppings rising from the water, forming mini-islands. Much of the lake is surrounded by black basalt walls.”

Heaven, Cheakamus River, Squamish, British Columbia
“Located halfway between Squamish and Whistler on the Cheakamus River, you’ll find overhanging climbs on Heaven’s 30-foot granite cliffs. Another destination with cold water, this place is best visited in high summer, or with a wetsuit in earlier months.”