The Entertaining Life of Courtney

Bellevue Club member Courtney LeMarco produces one of the most popular reality TV shows in the world and is quickly growing his own lifestyle brand. But it didn’t come easy. Read more about the tough road he took to success and the lessons he learned along the way.

Courtney LeMarco has a lot going on.

Most notably, he has been the executive producer of the Emmy-nominated reality TV show Hoarders since 2019. He is also an advocate for growing the entertainment industry in Seattle and mentors many young artists and filmmakers.

But that’s just the tip of the iceberg in terms of his professional ambition.

He recently launched MOTSI, a lifestyle brand that includes makeup, skincare (women’s and men’s) and swimwear lines. Under his direction, the group tirelessly researches toxin-free, environmentally friendly and socially responsible approaches to everything they make.

For example, the swimwear is made from 70 percent recycled plastic found in the ocean. And he partners with positive-minded influencers from all walks of life to represent the brand. In just a short time, MOTSI products have been featured in Forbes, Allure and Vogue.

When I sat down to talk with him on a sunny afternoon in September, he was also preparing for his first leading acting role in a movie he couldn’t talk about just yet. He said he was ramping up his fitness routine, dialing in his nutrition and getting everything in his life on point for the job. 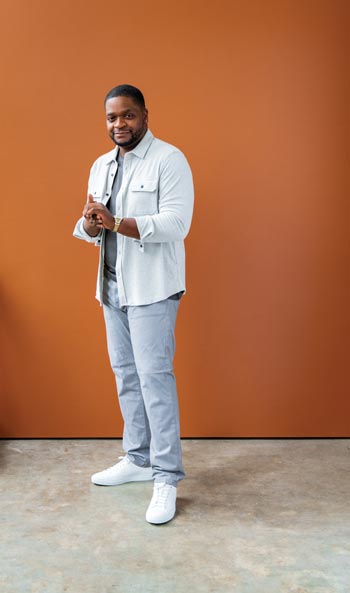 He talks with joy about all his endeavors and seems to thrive on a full schedule. So it came as a surprise when I asked him what his definition of wellness is, and he quickly replied, “It’s simple. It’s peace.” He explained that for him right now peace means passing up the opportunity to go out with friends and colleagues and instead opt for a hot bath, foot scrub, early bedtime and some good self-care.

“Wellness for me is not caring too much about what’s going on outside the bubble; it’s being good to yourself, being comfortable, eating healthy,” LeMarco says. “Having the right discipline for what you want and not getting distracted.”

But maybe it shouldn’t be a shock that he craves peace. After all, he’s been working and on his own from the age of 15. At that time, he was living in Los Angeles, being raised by his single mother who suffered from mental illness. He says they were very poor, and he sometimes didn’t know where his mother was or where his next meal was coming from.

“I remember being in 10th grade, and I couldn’t even pay attention to whatever the teacher was saying. I knew I needed to be doing something else to make sure I got my next meal,” LeMarco says. “So I just closed my book, stood up and put it on my teacher’s desk.

That day, LeMarco quit high school. The very next day he got a job as a dishwasher. He continued to work hard and move his way up through the restaurant industry, becoming an executive chef at a few different restaurants and eventually a private chef for the Boeing family.

“I had to be resourceful,” LeMarco says. “I learned you have to have grit and stamina, and you have to be able to take some heat. And that served me really well later in life, especially once I got into the entertainment business. It gave me a unique intuitiveness that I can bring to the table.”

He certainly finds himself with a seat at some very big tables these days. And it doesn’t matter what he’s doing—fashion, TV, beauty—he has one goal, and that’s to better other people’s lives now and give back. “In everything I do, it’s about the bigger purpose, the bigger meaning.”

When I asked where he got this passion, he said, “This might sound weird, but I’m inspired by the universe. You look at nature and existence, and isn’t that how it works? If we all practiced that in our lifestyle, wouldn’t that be great.”

He has no plans to stop. LeMarco will continue growing the MOTSI brand and working in the entertainment industry in the coming years, and then, “I think I want some chickens, maybe some llamas or alpacas on a big piece of land somewhere. Yeah, and I think that all goes back to that peace thing.”

Artist or professional you look up to:“The artist Sean Carter because, while we grew up in different places, I can relate to his story a lot, and what he’s done is incredible. I’m inspired by people who attempt growth and change.”

Favorite workout: “I like the Peloton; that’s my favorite. But I also love tennis. I want to play a lot more in fact.”

Advice for young kids: “Dig into your resources. You have more than you think you do. Look around at what you do have, and dig into those things, those relationships.”

Fashion inspiration: “Despite everything, my mom always wanted me to be the best-dressed kid at church. She was from Louisiana, and she took the Sunday-best thing seriously.”

Life philosophy: “At the end of the day, you have to treat people well.”